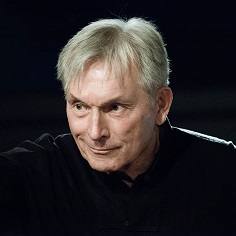 Polish composer and pianist, who studied composition and piano at the Fryderyk Chopin Academy of Music in Warsaw and with Nadia Boulanger in Paris.

Zygmunt Krauze won the 1st prize of the Gaudeamus Competition in Holland in 1966. Since then he has continued his carrier as a pianist performing mostly 20th century music. In 1967 he founded the Warsaw Music Workshop ensemble, which commissioned works from over 100 composers. He served as its artistic director and pianist for over 20 years. He has played with the leading orchestras conducted by Gary Bertini, Jan Krenz, Leif Sagerstam, Kazimierz Kord, Kazuyoshi Akiyama Paul Zukofsky, Ernest Bour, Hans Zender, Antoni Wit, Peter Eoetvoes, Reinberg de Leeuw and many others.

He is an author of six operas, several instrumental concertos, symphonic and chamber works. Together with architects he also composed spatial music, which was presented in Poland, Austria and France. He’s compositions has been performed on major new music festivals, by leading orchestras and chamber ensembles all over the world.

Since 1965 he has given seminars as well as master classes of composition and contemporary music performance, including prestigious centers of new music like: Darmstadt, Basle, Stockholm, Los Angeles, Tokyo, Jerusalem, Paris and New York. In 1982 he served as a visiting professor at Yale University. In 1996 he was nominated as an Eminent Corresponding Professor at Keimyung University, Daegu, South Korea. From 2002 he is professor of composition at the Academy of Music in Łódź, and from 2006 at the Fryderyk Chopin Academy of Music in Warsaw.

Between 1973-74 he was an artist-in-residence in Berlin at the invitation of DAAD (Deutsche Akademischer Austauschdienst). In 1982 he was invited by Pierre Boulez to become a musical advisor to IRCAM in Paris. Apart from that he was a member of the repertoire committee of the „Warsaw Autumn” Festival for ten years and in 1987-90 served as president of the International Society for Contemporary Music. He also served as president of the Witold Lutosławski Society and president of the Polish Section of the ISCM.

His honours and awards include: the Silver Cross of Merit of Poland (1975), the Medal of Distinction from Jeunesses Musicales in Poland (1979) and the title of Chevalier de l’Ordre des Arts et des Lettres in France (1984). In addition he received the Award of the Ministry of Culture in Poland 1989 and 2005. In 1999 he became an honorary member of ISCM. In 2004 he received the Golden Cross of Merit and in 2005 the UNESCO Heritage of the Humanity Award in Valparaiso, Chile. In 2007 he was appointed by the President of the French Republic Officer dans l’Ordre National de la Legion d’honneur.