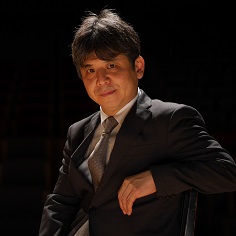 “I am searching for a new form of Japanese spiritual culture and music, one through which I can remain true to myself as well as to my origins. We need to examine the Western world again, more carefully, in order to see ourselves objectively and to truly get to know ourselves.”

Toshio Hosokawa, Japan’s pre-eminent living composer, creates his distinctive musical language from the fascinating relationship between Western avant-garde art and traditional Japanese culture. His music is strongly connected to the aesthetic and spiritual roots of the Japanese arts (such as calligraphy), as well as to those of Japanese court music (such as Gagaku) and he gives musical expression to a notion of a beauty rooted in transience: “We hear the individual notes and appreciate at the same time the process of how the notes are born and die: a sound landscape of continual ‘becoming’ that is animated in itself.”

Born in Hiroshima in 1955, Toshio Hosokawa came to Germany in 1976, where he studied composition with Isang Yun, Brian Ferneyhough, and later Klaus Huber. Although his initial compositions drew inspiration from the Western avant-garde, he gradually built a new musical world between East and West. He first gained widespread recognition with the 2001 world premiere of his oratorio Voiceless Voice in Hiroshima. In the last few years, Toshio Hosokawa has written numerous orchestral works, including Nach dem Sturm for two sopranos and orchestra, commissioned to celebrate the 50th anniversary of the Tokyo Metropolitan Symphony Orchestra, and the Roche Commission Woven Dreams (Cleveland Orchestra under Franz Welser-Möst, Lucerne Festival). Circulating Ocean, which was premiered by the Vienna
Philharmonic in 2005 at the Salzburg Festival, has meanwhile become part of the standard repertoire of many orchestras. In 2013 Toshio Hosokawa returned to Salzburg with Klage for soprano and orchestra based on a text by Georg Trakl (NHK Symphony Orchestra under Charles Dutoit, soprano: Anna Prohaska). A performance of the organ concerto Umarmung, which had its premiere in 2017 with Christian Schmitt and the Bamberg Symphony, was reprised in February at the Wiener Konzerthaus with the Vienna Radio Symphony Orchestra under the direction of Cornelius Meister.

In December 2018, the Ensemble Intercontemporain gave the world premiere of a new melodrama with soprano Kerstin Avemo and Nô actress Ryoko Aoki. The libretto, written by Oriza Hirata, is based on a traditional tale from Nô theatre. The playwright previously wrote the libretto for Toshio Hosokawa’s opera Stilles Meer, which indirectly addressed the nuclear catastrophe at Fukushima. Premiered at the
Hamburg State Opera in 2016, the work will be re-staged this season. A further new opera, dealing with Heinrich von Kleist’s novella The Earthquake in Chile, will be premiered at the end of the current season at the Stuttgart Opera.

Last season was full of resounding successes for Toshio Hosokawa, in particular with his opera compositions. These included the opera Stilles Meer, which was restaged at the Hamburg State Opera, and the premiere with the Ensemble Intercontemporain of the melodrama Futari Shizuka (The Maiden from the Sea), which will be restaged in the coming season at the New Music Festival Toronto and at the Tongyeong Internation Music Foundation, and his opera Erdbeben.Träume, which premiered in July 2018 at the Stuttgart Opera, based on a libretto by the Büchner prizewinner Marcel Bayer adapted from Heinrich von Kleist’s novella The Earthquake in Chile. Now Hosokawa turns again to chamber music and purely orchestral compositions, with a new work for the Percussion de Strasbourg ensemble in November 2018 followed by the world premiere of a work for the cellist Steven Isserlis and the Hiroshima Symphony Orchestra in summer 2019.

Many of Toshio Hosokawa’s earlier music theatre works have become part of the repertoire of major opera houses. His first opera Vision of Lear garnered critical acclaim at the Munich Biennale in 1998, and his 2004 work Hanjo, staged by the choreographer Anna Teresa de Keersmaeker and co-commissioned by Brussels’ La Monnaie and the Festival Aix-en-Provence, has been seen on numerous stages since its premiere. Like Hanjo, Matsukaze also draws on material from the Japanese noh theatre tradition. The opera was first performed in 2011 in a production by the choreographer Sasha Waltz at La Monnaie and subsequently in Berlin, Warsaw, and Luxembourg. Staged performances of the monodrama The Raven for mezzo-soprano and ensemble, which had its world premiere in Brussels in 2012, have also taken place.

Toshio Hosokawa continues to compose works that focus on nature themes such as the horn concerto Moment of Blossoming for Stefan Dohr and the Berlin Philharmonic (2011). In some of these works he combines Japanese and European instruments, as in Voyages X Nozarashi for shakuhachi and ensemble. Traditional Japanese instruments such as the sh? or koto also feature elsewhere in his oeuvre, which is comprised of approximately 130 compositions.

Hosokawa has received numerous awards and prizes. He has been a member of the Academy of Fine Arts Berlin since 2001 and was a fellow of the Institute for Advanced Study Berlin in 2006/7 and 2008/9. In 2013/14 he was composer-in-residence at Netherlands Philharmonic Orchestra and in 2018 he received the Japan Foundation Award. He is the Artistic Director of the Takefu International Music
Festival and Suntory Hall International Program for Music Composition.