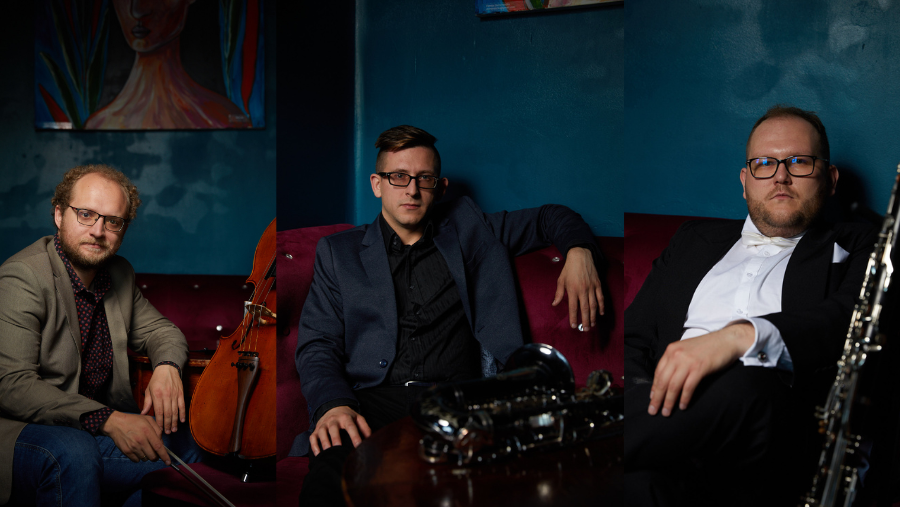 In 2013, a group of Kraków-based instrumentalists shared stage as part of the European Workshop for Contemporary Music, conducted by maestro Rüdiger Bohn. Having then played together at Darmstadt’s Internationale Ferienkurse für Neue Musik, the musicians—persuaded by Martyna Zakrzewska, Mateusz Rusowicz, and Piotr Peszat—established an independent body. A couple of events held in a community centre by one of the town’s exit roads and in a then neglected and declining theatre-slash-cinema marked the beginnings of Spółdzielnia Muzyczna contemporary ensemble (literally, ‘Musicians Associated’—but we would like to remain known under our Polish name), a group who specialise in performing new music.

Spółdzielnia Muzyczna have been featured repeatedly at the town’s as well as the country’s most important music events, including the International Festival of Contemporary Music ‘Warsaw Autumn’, Kraków’s Sacrum Profanum, Audio Art, ELEMENTI, and aXes, Musica Moderna in Łódź, NeoArte in Gdańsk, and the Festival of Traditional and Avantgarde Music ‘KODY’ in Lublin. In 2020 the group performed at the Młodzi Muzycy Młodemu Miastu 2.0 festival in Stalowa Wola, so contributing to one of Poland’s formative cyclical contemporary music events being reinstituted after a hiatus of forty years. In the 2019/2020 season the ensemble presented their original programmes of 20th- and 21st-century classics with the ‘ARS MODERNA’ series hosted by the Karol Szymanowski Philharmonic in Kraków. In 2021 the Ernst von Siemens Music Foundation provided support for the structural and artistic development of Spółdzielnia Muzyczna, awarding them one of that year’s prestigious Ensemble Prizes.

During the summer of 2018 Spółdzielnia Muzyczna participated in the Ensemble-Akademie Freiburg, a contemporary chamber music masterclass where they learned from ensemble recherche. In their hometown of Kraków the group themselves pursue several educational activities within the field of new music: while instrumental workshops as well as competitions for young composers have taken place, what remains the ensemble’s largest-scale pursuit in this domain is the series titled ‘Open Your Ears. Here and Now’—that is, live and illustrated lectures on the most prominent and inspiring artists of, and approaches to, musical composition, given so far in twenty-four original, individually themed editions.

Graduate of the Academy of Music in Kraków (2013), involved above all in performing chamber music. Cellist in Spółdzielnia Muzyczna contemporary ensemble, PerDuo Vnc, and IPT Wójciński/Bańdur/Gucik, with whom he is featured in concerts both in Poland and abroad. Contributor to Kraków’s theatre scene as part of Teatr Szczęście, Teatr Odwrócony, and Teatr Bez Scenografii. Author of theatre music, electroacoustic, and electronic music. With a string quartet he was awarded the 4th (2006) and the 1st (2007) prizes in the Talents for Europe competition in Dolny Kubin (Slovakia), as well as won the special award endowed by Moyzes Quartet (2007). In 2010 he received a grant for participation in master classes held during the Oberstdorfer Musiksommer festival. Four-time award-winner at the FAMA Festival in Świnoujście (2016–2019), including the Andrzej Jakóbiec Award in 2018 and the ‘Neptune’s Trident’ in 2019. Winner of the 1st prize in Ogólnopolski Konkurs Kompozytorski im. J. Patkowskiego [Józef Patkowski National Composers’ Competition] (2017).

Born in 1990 in Cieszyn. In 2009 he graduated from the first- and second-level Ignacy Jan Paderewski State Music School in Cieszyn, in the saxophone class led by Tomasz Gmyrek. In 2014, graduating with honours, he earned a master degree at the Academy of Music in Kraków, in the saxophone class of Prof. Andrzej Rzymkowski. In 2015 he completed extraordinary studies under Univ.-Prof. Lars Mlekusch, at the Konservatorium Wien Privatuniversität. In 2018 he obtained the title of Doctor of Musical Arts at the Academy of Music in Kraków.

He has taken part in many saxophone masterclasses: with Arno Bornkamp, Nobuya Sugawa, Lars Mlekusch, Günter Priesner, Vincent David, Massimo Mazzoni, and Claus Olesen, among others. He is involved in numerous artistic projects, performing solo, in chamber ensembles, in orchestras, and as a soloist with orchestra both in Poland and abroad (Germany, Austria, Czechia, Hungary, Slovenia).

Tomasz Sowa obtained a master’s degree with honours in the Krzysztof Penderecki Academy of Music in Kraków, having studied with prof. Andrzej Godek, and has been pursuing his doctoral studies there since, under Janusz Antonik, Ph.D.

He was awarded several dozen prizes in musical competitions held both in Poland and abroad, including Germany, Austria, Serbia, Italy, and South Africa: besides first prize, gold medal, and audience award at the Junior Delphic Games in Johannesburg (2011), he won first prizes at the National Clarinet Festival in Krosno (2009, 2012) and in the International Music Competition in London (2015), among other accolades. Apart from that he earned two particular distinctions: the Gottfried von Ainem Award (2016) and the Viktor Kalabis Award during the isa FESTIVAL in Austria (2017).

He has given masterclasses to budding clarinettists in Poland, Thailand, Armenia, and Belgium.

With chamber music occupying a special place in his professional life, the clarinettist formed the Cracow Golden Quintet. Awarded several prizes in prestigious competitions, the group earned many enthusiastic reviews, performing in Poland—in the Krzysztof Penderecki European Centre for Music or in the Kraków Philharmonic, for instance—as well as in the world—in such celebrated venues as Accademia Nazionale di Santa Cecilia in Rome or the Aram Khachatryan Hall in Yerevan.

He has received grants through the ‘Młoda Polska’ (Young Poland) state-funded programme, from Poland’s Ministry of Culture and National Heritage (three times), from the J&S Pro Bono Poloniae foundation, from the Sanok Poviat Staroste, the Podkarpacka Foundation for the Development of Culture, and Warsaw’s Centrum Edukacji Artystycznej.