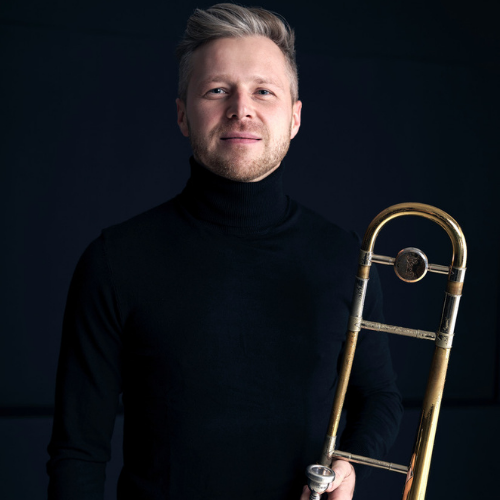 Robert Żelazko  is a lecturer at the G. and K. Bacewicz Academy of Music in Łódź, where he has been working since 2011. Between 2007 and 2011 he was the first trombonist of the National Philharmonic in Warsaw.

He completed his studies at the F. Chopin Academy of Music in Warsaw with Prof. R. Siwek and at the Hochschule für Music und Theater in Hannover with Prof. Jonas Bylund (2006). For many years, he honed his playing with Ardash Marderosian, the principal trombonist of the Lyric Opera in Chicago. He has participated in master classes of trombonists such as Christian Lindberg, Jorgen van Rijen, Dany Bonvin, Jay Friedman, Joseph Alessi, Ingemar Roos, David Bruschez, Håkan Björkman.

Robert is the winner of several competitions, such as: National Trombone Festival in Warsaw, Remington Trombone Choir Competition in Birmingham and finalist in the Smith/Shires Prize Tenor Trombone Competition ITA in Las Vegas in 2007.

He has performed with Christian Lindberg and Hakan Hardenberger at the Sierre Music Festival in Switzerland.

He has played as a guest artist with the following orchestras: Gotintingen Symphoniker, Staatsoper Hannover, Sinfonietta Cracovia, Polish Radio Orchestra in Warsaw, Grand Theatre of the National Opera in Warsaw, NFM Orchestra Leopoldinium in Wrocław. He currently works on a permanent basis with the Sinfonia Varsovia Orchestra, with which he has toured in China, South Korea, Japan, France, Germany and Austria.

For many years, he has participated in the International Festival of Contemporary Music ‘Warsaw Autumn’, where in 2016 he made a guest appearance with the ensemble ‘SCENATET’, performing Angel View by Juliana Hodkinson. Robert enjoys performing contemporary music repertoire and has premiered several works. During the recent International Conference ‘Trombone in 20th- and 21st-century music. Inspirations and Perspectives’, of which he was the initiator and artistic director, he performed his first composition Resonator for solo trombone.

He has participated several times as a lecturer, during the festivals ‘Żywieckie Suwakowanie’, and the International Conference on the Art of Performing Orchestral Parts in Łódź in 2019 and 2020.

He has participated in several recordings, including the Hannover Trombone Octet in 2009 and the Sinfonia Varsovia Brass ensemble in 2017, and currently he is preparing to record his first solo album.

He has twice received the scholarship of the Minister of Culture, Art and National Heritage in 2003 and 2020.