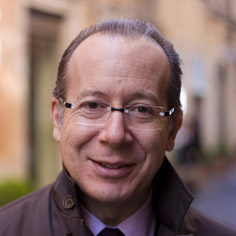 One of his greatest admirers is Pierre Boulez and it is in France that Ivan Fedele consolidated his reputation as a composer whose opus, currently, counts nearly one hundred titles and includes composition of every type: orchestral pieces, works for the theatre, electro-acoustic and chamber music. Without rejecting the teaching of the masters of the historic avant-garde, Fedele seems to put its principles into practice, freeing the music from the laboratory environment and leading it back to the freshness of listening, to the need and urgency of keeping the channels open with the interpreters and listeners.

Fedele was born in Lecce, Italy, in 1953. After studying at the Conservatory in Milan and the Accademia Santa Cecilia in Rome (though he also studied philosophy at the Università degli Studi di Milano), at the early age of 28 he won the Gaudeamus Award (for the first String Quartet and Chiari for orchestra), which launched him on the international scene. In 1989, his composition for orchestra Epos won the Petrassi Competition in Parma. Antigone, an opera commissioned by the Teatro Comunale in Florence for the opening night of the Maggio Musicale, was awarded the Premio Abbiati by the Association of Italian Music Critics as the best new work of 2007. The Cd Animus Anima received the Choc de la Musique 2003 from the magazine “Le Monde de la Musique”, whereas Maya was awarded the Coup de Coeur 2004 by the Académie Charles Cros and Mixtim won the Premio del Disco Amadeus in the contemporary category for the year 2007. In addition to his many chamber works, he has also composed pieces for orchestra alone, concertos or symphonic-vocal music, of which the most recent include En archè and 33 noms (a commission from the Teatro La Scala in Milan).

In 2001 he was honoured by the French Ministry of Culture with the title of Chevalier de l’Ordre des Lettres et des Arts. In 2005 he was appointed a Member of the Accademia Nazionale di Santa Cecilia in Rome. In 2007 the Italian Minister of Culture assigned him the Chair in Composition for the Master Courses in Music Studies at the Accademia.